I thought Topps' latest set was not going to be out until February 1, but imagine my surprise when dropping by Target on my way home tonight and finding new cards! I grabbed a handful of cards and headed home to start ripping. I have read as little as possible about the set and its inserts. I wanted to be surprised for when it came out. Other than the '87 minis, I had no idea.

In the first pack was a one of the new inserts called "Gold Standards". It is meant to chronicle players reaching certain milestones, such as 500 Home Runs or 3,000 Hits. I was stoked to see Reggie in an Angels' uniform. 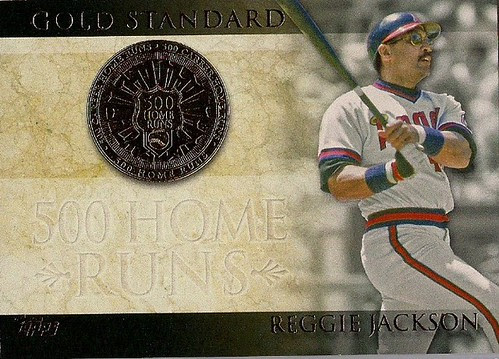 The second insert in this first pack was one of the Timeless Talents cards, which compares an older player with a newer player. Again, not one but two Angels! The stars were aligned just right for me tonight! Plus it's a picture of Ryan in his first year with the Angels, as '72 is the last year they used the lower case 'a' with a halo on it. 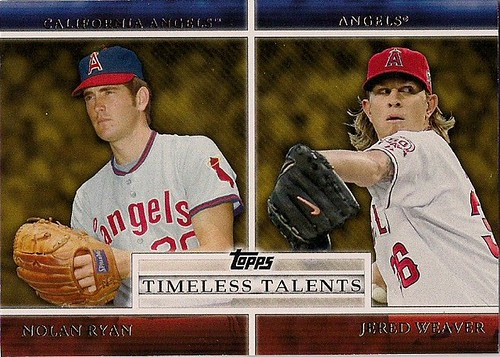 At this point, I was so excited with the inserts, I hardly paid attention to the base cards. They're nice, glossy, shiny, but they're not exactly different or thrilling. They sort of remind me of one of the Topps Total sets, with the oval design.

I ripped in to pack 2 and out drops a mini of Andre Ethier! First Angels now Dodgers! The minis are in the style of the '87 set, and if you didn't like that set, you're not likely to care much about these other than the fact that they're small. I had originally thought they'd be like the '87 minis that were produced back in... '87. The ones that have a white cloud frame around the pic. Thankfully they're not like that. 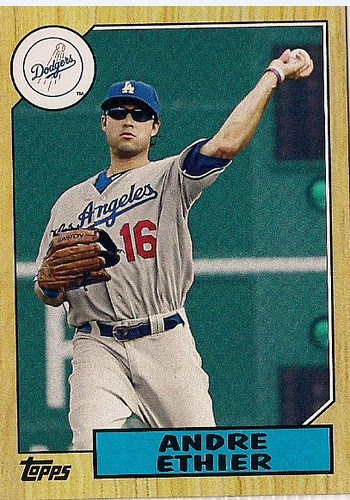 The next insert in this pack was the "Gold Futures" subset. And as if Topps hand collated these 2 packs for me, out drops another Dodger, Dee Gordon. The cards themselves are nice. I'm not really a fan of foil, but it works on this card, probably because the white background at least makes it legible. I'd have liked a little more room for the picture and less room given to the Gordon's number and position, but such is life. 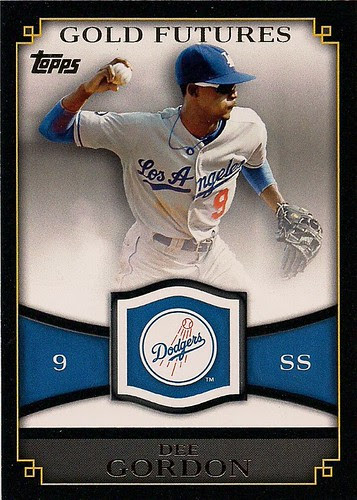 More about the other cards tomorrow!
Posted by Anthony Hughes at 8:13 PM