This last weekend was a big "sports collectibles" show here in Houston. It's about as big a card show as we get here. More aimed toward football than baseball, only one of the dozen athletes doing signatures was a baseball player; Billy Williams. Interestingly, his autograph, and picture with him if you wanted, was only $55 - lowest of all the people at the show.

But what was great about attending this show was that I was with my dad! I have not been to a card show with my dad since... boy, maybe mid-80's, so this was a treat.

There were some great framed photos, one in particular was Koufax winding up and delivering at Dodger Stadium. I think it was from his September 1965 no hitter. I was mesmerized by the photo. It was big, maybe foot-and-a-half by two feet, and Koufax took up whole picture, batter, ump and catcher just a blur in the foreground. Behind Koufax, in the distance, you could make out the scoreboard. It was framed, autographed and over $300. Which is not a lot of money considering, but I passed on it. 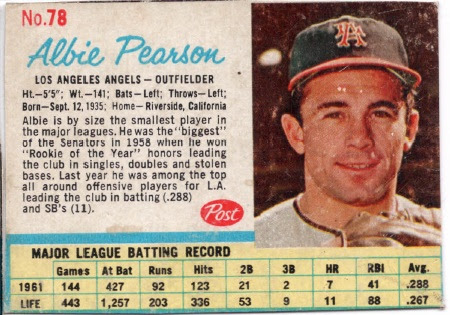 I only really brought lists for a couple sets I'm trying to finish, primarily the 1970 Topps. After looking around for an hour, I had sort of given up hope when the best price I could find for the 7th series no-name high-number guys was like $7.
Not gonna happen.
Rick Reichardt? $7?
Nope.
$6.75 for Duffy Dyer?
I'll pass.
I bought Hank Aaron and Roberto Clemente in this set for $7 and $4.50, respectively. No way am I paying $7 for a common, I don't care how rare someone thinks it's "high" number is.
Unfortunately for the guys selling this stuff - I've seen Sportslots. 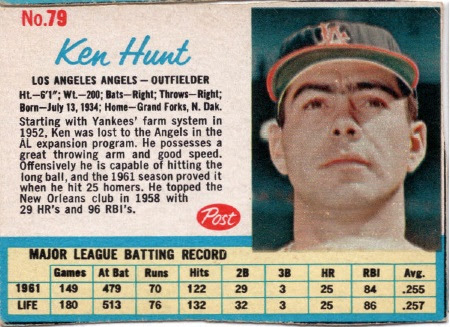 I'm just about to leave empty handed when the last table on the way out has a dollar box and the tab dividers are all 60's and 50's. Jackpot!
I found a handful of these 1962 Post cards. They were so worn and loved and beautiful that I knew I had to have them. Of the 10 Angels in the Post set, here were 4 of them at a buck each. One great thing about collecting the Angels is that other than Nolan Ryan, (and apparently 1970 Topps Rick Reichardt!), there aren't too many high dollar cards.

I like these, and the poorly cut edges only make them more fun for me. I am reminded of a time when getting a treat from the morning cereal box was a huge part of a kid's life!

My dad even bought me a card! How about that? He ponied up the dollar for Steve Bilko! Thanks pop!
Steve Bilko was a big part of my dad's childhood baseball. He grew up in Los Angeles, which back in the 1700's when he was a kid, had no Major League teams.
But they did have the Pacific Coast League, which meant Los Angeles Angels and Hollywood Stars.
Dad's favorite player with the Angels was Bilko, because the guy used to rip the cover off the ball and send many a kid home with a souvenir. Here's a pic of Bilko that I "borrowed" from the LA Times archives. 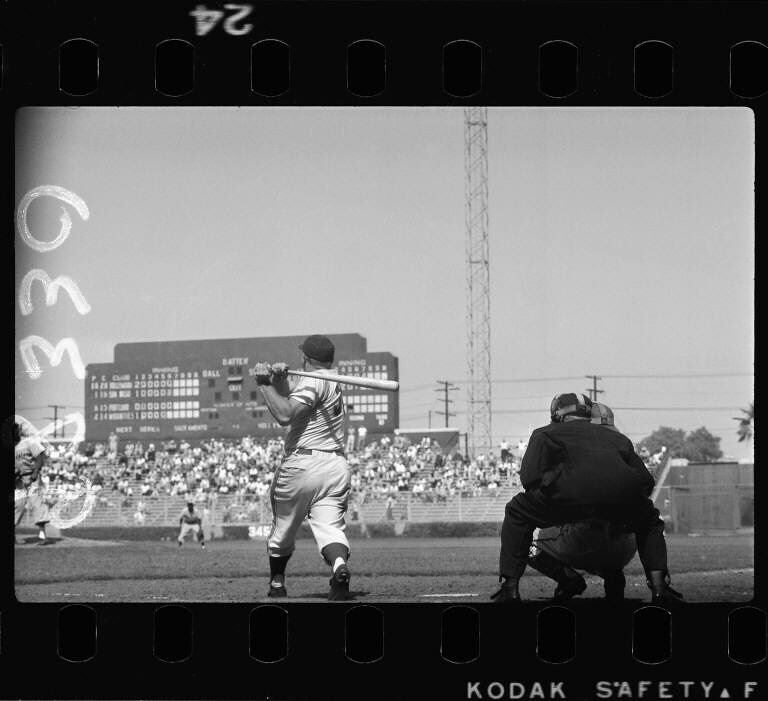 Thanks dad!
Posted by Anthony Hughes at 7:25 PM