1969 Deckle Edge inserts, now and then

Topps cards have had inserts for as long as I can remember collecting.

As a kid, I don't recall coming across too many, but I had enough to make them special. There's the story booklets and posters from the '70 set, the scratch offs and metal coins from the '71 set. I have a few of each of these, but the oldest insert cards I have that I actually pulled myself from packs, are a pair of what is called "deckle edge" cards from the '69 set. 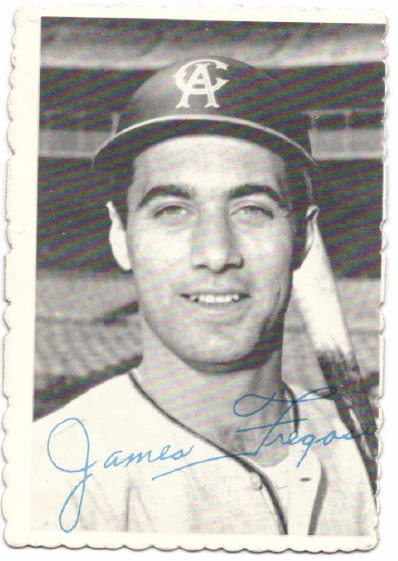 I have had them forever. For many years I didn't even keep them with my regular baseball card collection. They got to go in the special wooden chest full of odd trinkets such as a huge Bolivian coin that I was convinced was pirate treasure and a bright red plastic apple I stole from the Snow White ride at Disneyland on a dare. 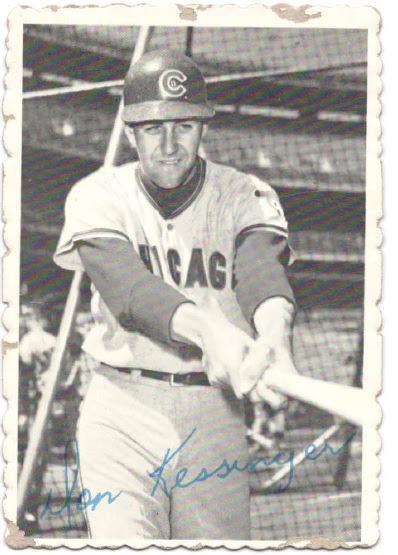 For many years, I really thought that the autographs were real. No one could convince me otherwise. I used to take the card out and stare at it and wonder where was Jim Fregosi sitting when he signed my card?
Did Don Kessinger know that it was *me* that had this one and only card that he signed?
Probably because of the blue ink, I was convinced they were real.
There have been many baseball card sets over the years that have had printed signature on them, but I am pretty sure they were all black and, to me at least, pretty obviously pre-printed.


Recently I bought a handful of 2012 Topps Archive. I pulled this Ichiro Suzuki deckle edged card from a pack and nearly dropped my shorts! A signed Ichiro Suzuki card! Wow! Look at that! It's right there in the blue ink! How did I get so lucky!. 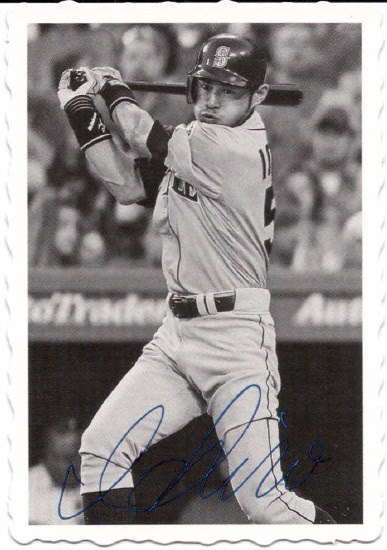 It was a fun 10 minutes as I rushed over to look at eBay to see if this was really a signature, and how much these were going for. It didn't take long to realize that the printed ones had the blue ink signature too.
I cracked open the binder I have with all the odd-ball cards in it, and sure enough there were Jim Fregosi and Don Kessinger, signed names with blue ink, smiling at me, almost laughing, "You're still just a big kid, aren't you?"
Posted by Anthony Hughes at 10:04 PM